From the case file: $4 million a month (FCR's costs), Roger Green freelances, and the $6 billion deception

For every month Forest City Ratner waits to commence construction on the Atlantic Yards project, it costs the company $4 million. State Assemblyman Roger Green has a novel theory for why the developer traded office space for housing in the Atlantic Yards plan. And 15 public officials, apparently unfazed by parroting the developer's paid consultant, have predicted that the project would bring $6 billion in new tax revenues to the city and state.

Those tidbits and more emerged from the legal papers filed in the case challenging Forest City Ratner's plans to demolish five properties and asserting that a lawyer for the Empire State Development Corporation has a conflict of interest because he previously represented the developer. Yesterday the judge refused to block the demolitions but ordered the attorney removed from the project.

FCR VP Jim Stuckey, in his affidavit, argued against delaying the project, because it would cost the developer $4 million a month. He stated:
At this time, it costs FCRC about $2,500,000 per month to carry the real property that it has acquired for the Project and the overhead that is in place to work on the Project - a figure that does not include FCRC's legal fees and also does not include the operating losses that the Nets basketball team, which has been owned by an FCRC affiliate since early 2004, and continues to incur while it is based at its current venue in New Jersey. In addition, delay on a project such as this one probably would subject FCRC to escalation in its eventual construction costs of nearly $1,400,000 per month. Therefore, if a preliminary injunction were to stop the Project temporarily for even one month, the damages to which FCRC would be subjected would exceed $4,000,000 per month.
(Photo from Forest City Ratner web site.)

Alternatively, it might be argued that the CBA was also promoted to garner political support for a project that would cost the public well over $1 billion.

In his affidavit, Stuckey asserted that the project would be an economic boon:
If approved and built, the Project also will serve as a powerful engine of economic growth in other respects as well. We estimate that the Project will create 15,000 construction jobs and, eventually, at least 2,500 permanent jobs. We also estimate that the Project will generate $6.1 billion in new tax revenues-and $5.0 billion in net tax revenues - for the City and the State over the next 30 years.

Attached to the affidavit of Borough President Marty Markowitz are numerous letters sent to the Metropolitan Transportation Authority from local elected officials, all written from the same template, apparently provided by Forest City Ratner, making the same economic claims. A typical sentence:
According to the estimates, the Arena will add another 400 jobs and - most importantly - serve as an economic engine generating over $6 billion in new tax revenues to the city and state over 30 years.

First, the arena jobs may be filled by current employees. And it's not the arena but the project that has been estimated to generate $6 billion in revenue. But the $6 billion in revenues must first be offset by the at least $1.1 billion in public costs that Stuckey acknowledges (though the politicians don't). More importantly, the costs and benefits are estimates by the developer's paid consultant, and its assumptions have been criticized not only by project critics but also by the New York City Economic Development Corporation and the Independent Budget Office, who point out significantly lower revenues and higher costs. In other words, the cost-benefit claim deserves a much closer look.

In the course of explaining FCR's relationship with Paget, Stuckey acknowledged that the project has been delayed:
In fact, in a letter agreement dated February 18, 2004 (the "Cost Letter"), between FCRC and ESDC, I confirmed to ESDC's Chairman and Chief Executive Officer, Charles A. Gargano, that FCRC would "pay certain costs incurred by [ESDC] with respect to the proposed Atlantic Yards-Brooklyn Arena Mixed Use Development Project (the `Project')."... The Cost Letter specifically confirmed that FCRC had "requested that [ESDC] authorize and/or oversee... services to be performed in connection with the Project," and it specified that these services included "[l]egal services to be provided by Sive, Paget & Riesel, P.C. in connection with the environmental analysis of the Project...."
At FCRC, we understood the Cost Letter to mean that Mr. Paget really was representing ESDC, although FCRC was obligated to pay his firm's fees. This is customary practice in virtually every public-private transaction we have been a party to and was customary when I worked in government as well. Furthermore, as shown in the accompanying affidavit of Jane Marshall, an FCRC Senior Vice President, when the Cost Letter was finalized in February 2004, we anticipated that the Project would move forward to the point where ESDC would formally retain Mr. Paget much more rapidly than turned out to be the case.

Paget said that he "provided advice to Forest City, from time to time, from the time of my initial retention in December 2003 until September 2005, with long periods of inactivity in between." However, "[f]rom and after October 1, 2005, I and my firm have at all times advised only ESDC concerning the Atlantic Yards project." The reference on his firm's web site that stated that he represented the developer "is outdated and has been amended."

Anita Laremont, senior VP and general counsel for the ESDC, said that hiring Paget was not a conflict of interest:
Indeed, we believe that such a characterization indicates a serious and fundamental misconception of ESDC's unique mission and the legislatively mandated role it plays in the development process.... When ESDC agrees to become involved in a proposed project, it does so because it perceives that the project has the potential to further ESDC's mission of fostering economic investment and development. In short, when we determine to sponsor a project, we want to see it completed for the benefit of New York State and its residents. The developer also wants the project to be completed, so our interests are not adverse.

That didn't convince the judge.

Paget also said that his firm had represented Forest City Ratner in two unrelated and much smaller cases since March 2004, with a total billing of $27,000.

Wonder what a top environmental lawyer bills? Paget bills $550 an hour to ESDC, while two of his colleagues bill $480 and $350 respectively. 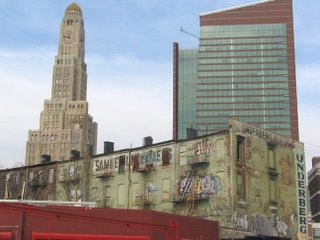 Regarding the Underberg Building, FCR Senior VP Andrew Zlotnick stated that company officials were worried about the building falling down:
This structure is so unstable that it has been supported by a sidewalk bridge for several years, and this condition is extremely dangerous due to the fact that there is a public bus stop on Atlantic Avenue immediately adjacent to the property. After demolition of this property, I and others at FCRC will sleep better at night, knowing that this structure is no longer a threat to the pedestrians who walk under that sidewalk bridge every day. (Photo from Forgotten NY.)

Green said in his affidavit:
I have personally walked the streets in and around the Project's area and have visually examined the exteriors of the buildings that the developer intends to demolish. I also have reviewed the expert engineering report that recommends the demolition of these buildings. There is no doubt at all in my mind that these buildings are very dangerous and pose serious threats to the safety of my constituents who live along or use these streets. It horrifies me to think that a court is being asked to halt the demolition of these obviously hazardous structures.

Green might have better left the authoritative commentary to a real engineer, who had a different opinion. (Then again, Council Member Letitia James, a "This Old House" fan, could've done so too.) 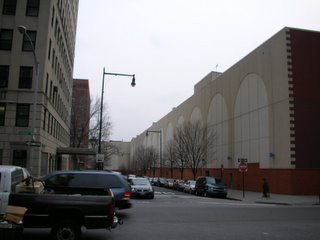 The Rev. Herbert Daughtry said in his affidavit:
I [have] always been impressed by Mr. Ratner's public-mindedness and always have found Forest City Ratner Companies to be an organization that cares about the communities in which its projects are built and goes out of its way to do right by those communities.

Well, Ratner has begun making contributions to local charities. But has the Rev. Daughtry taken a walk around the perimeter of the Atlantic Center mall?

Green offered another explanation for Forest City Ratner's decision to trade office space for luxury housing in the Atlantic Yards plan: it was the developer's concern for the community. In a 6/28/05 letter to the Metropolitan Transportation Authority included in the case file, Green wrote:
In response to concerns that the developers [sic] proposal for 1.9 million square feet of commercial office space might be a burden on the infrastructure and the built environment of the local neighborhoods (Fort Greene, Prospect Heights, Park Slope), Forest City Ratner Companies is now offering up an alternative plan that would build 428,000 square feet of commercial space.

However, the market for office space was iffy at the start, and became even more questionable by the time Forest City Ratner made the switch. The New York Times reported 11/6/05 that it was a question of revenue:
Officials of Forest City Ratner said they eventually realized that they would have to reduce the amount of commercial space, to accommodate condominium units that would help pay for the project, including the below-market rental housing.

As I pointed out, the evidence suggests that Forest City Ratner had had the condo plan in the cards for a while, but wanted ACORN on board before announcing the switch a week later.

In his affidavit, Borough President Markowitz declared:
I am an unqualified supporter of the Atlantic Yards project. This project will be a huge growth engine and will benefit a wide swath of our public with thousands of units of affordable and market rate housing, thousands of good, well paying jobs, and billions in new net tax revenues for the Borough, the City and the State.

So much for Marty's concerns about privatized park space on the arena roof and even the scale of the project. Well, he did acknowledge: That is not to say that the Project does not present challenges for the Borough, including traffic and its scale, among others, and that the Project's opponents, many of whom have legitimate and fair-minded concerns about the Project, should have input in shaping the Project.

Final scope in a month?

The ESDC's legal filing stated that a Final Scoping Document, which precedes the Draft Environmental Impact Statement and then a public hearing, should be issued within 30 days. The Draft Scope generated much criticism and a raucous public hearing, so it'll be interested to learn if the agency is prepared to consider a broader range of public impacts than initially outlined.