Toward transparency: where's the Atlantic Yards web site and the latest Brooklyn Standard?

"Here we are opening ourselves up - tremendous transparency, for two years," Forest City Ratner VP Jim Stuckey told the New York Times in an article published 11/6/05. Then again, the company hasn't been willing to appear at forums where it would face significant criticism.

But there are more basic questions of transparency: when will the company update its Atlantic Yards web site and also post the latest edition of its Brooklyn Standard p.r. sheet? The former has been down for two months. The June/July issue of the Brooklyn Standard is available, but not the Fall issue. (Short answer: I don't know, since a Forest City Ratner PR representative did not respond to my query.)

The web site, at Bball.net, launched in December 2003, is headlined Bring Basketball to Brooklyn, though the Atlantic Yards project is about much more than an arena.

It was due for an update. Until an "under construction" notice appeared about two months ago, in early November, the site continued to maintain the December 2003 press releases that promised 10,000 jobs and 4,500 housing units, numbers that have changed dramatically. (For the original web site, go to the Internet Archive's Wayback Machine. Start with the Dec. 17, 2003 iteration, but note that many but not all attached documents are available.)

It also contained architectural sketches from Frank Gehry's office, including this: 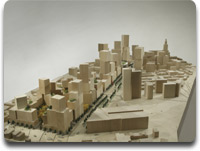 They remained on the web site but were made obsolete last July after designs were released to the New York Times (addenda courtesy of Naparstek.com):

New designs are in the works--maybe we'll see them when the web site is revived--as Gehry recently said, "[W]e’ve taken chunks of it away, actually, to bring it down into scale, to integrate it with whatever the existing fabric is there and then finding a way, in brick and metal and glass, maybe precast, a language that can work in that area that’ll feel like a very special place."

As for the Brooklyn Standard, it was launched in mid-June, according to a Forest City Ratner press release, "to keep borough informed about Atlantic Yards project." But again, the project has changed dramatically since June, and the second issue, released in October, contained updated (though, as I noted, incomplete and misleading) information about the project.

But where's the web version of that second issue? Here's a glimpse:

It's not technically difficult to put the issue up on the web. Is it that Forest City Ratner and publisher Manhattan Media are unwilling to post a version with the corrections requested by a contributor whose name was attached to stories he didn't write? It's a lingering question.

Two errors in one sentence: the Times cites "rezon...