"Struggling" Gehry on "out of scale" project: "If it turns out great, that's what's right"

Internationally acclaimed architect Frank Gehry told an audience at Columbia University two months ago that the Atlantic Yards project, which he called "out of scale with the existing area," is such a struggle that he sometimes wants to "jump off the Brooklyn Bridge." A guest on the 10/31/05 "Citizen: The Campus Talk Show," Gehry also revealed that developer Forest City Ratner has in fact agreed to his requests to scale down the project--something FCR has not publicly disclosed, and something unclear in the Columbia News Service report on the talk--though he didn't describe the amount of the reduction, which is a contentious issue.

Gehry acknowledged that Forest City Ratner's history is that "they haven't" been "interested in doing something special," but now "they have been very fastidious in supporting the things that I think are important." He acknowledged that the scale was driven by the developer, but said, "the developers have been very accepting of my pushback. And so we’ve taken chunks of it away, actually, to bring it down into scale." Gehry also observed that he normally would've brought in five other architects to ensure that the complex "doesn’t look like a project," but the client said no.

Gehry, who described himself as "a do-gooder, liberal," said he was trying to design the project "within a very open dialogue with the people who are involved," but acknowledged that success on the project was subjective: "What’s right is, if it turns out great, that’s what’s right." Indeed, though Gehry comes off as an earnest, well-meaning fellow, it's apparently not his role to be worried about a planning process that urban affairs expert Tom Angotti calls "all backwards." Note that Gehry also characterized Ratner as a fellow "liberal, do-gooder" in the 7/25/05 New York Observer; others, like Cooper Union's Fred Siegel, have called Ratner "master of the subsidy." 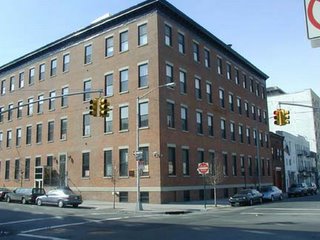 Despite Gehry's expressions of anxiety, he professed relatively little dismay that about the "not very many" buildings that would be razed, "because that was a given to me."He said that "when we started, there were a few buildings that were going to be kept, and we worked around them, and that felt better to me, to be able to do that, but they disappeared." It's unclear what he meant by that--did they disappear from the preservation effort (probably) or disappear because they were torn down? The project was in fact designed around the recently converted Newswalk condo, while two other buildings--the former Spalding factory (right, thanks to Forgotten NY) and the Atlantic Arts building--are slated to fall. 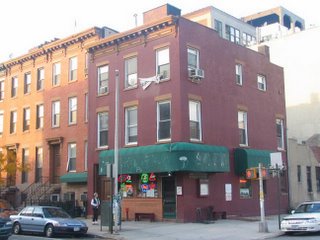 Gehry described the section of Prospect Heights--a name he didn't use--at issue as "a neighborhood that’s not very well-defined," which is not inaccurate, given that Pacific Street has a industrial buildings converted to condos, empty buildings, and a homeless shelter, while Dean Street (below, thanks to Forgotten NY) has both row houses and industrial buildings (and another homeless shelter). But Gehry characterized critics with a broad brush: "[T]here is a constituency of people that live there who fantasize this Brooklyn as brownstones and Court Street and Carroll Gardens and all that, which isn’t on this site." Well, for one thing, there are row houses in the proposed project footprint, so his "new neighborhood" would hardly be placed on a tabula rasa. Also, the community-developed Unity Plan for the Vanderbilt Yard envisions high-rise buildings, though not 40-60 stories, like some at Atlantic Yards. Why would Gehry mention Carroll Gardens and its major thoroughfare, Court Street, when project critics are far more likely to come from Prospect Heights and adjacent rowhouse neighborhoods like Fort Greene and Park Slope? Maybe because his daughter lives there.

The hour-long show covered a number of issues, and included slides shown to the audience of various projects. Notable is that Gehry himself brought up Atlantic Yards rather than follow the lead of host Kelvin Sealey. The issue was obviously fresh in his mind.

Early in the show (approximately 3:30) Sealey asked his guest about his early professional roots.

FG: I worked in a lot of offices in Europe and in L.A., and was interested in city planning. I’m a do-gooder, liberal, and I still am. I’m not a Bushie. I’m respectful, but… barely.

KS: Can we go to your design education?

FG: Architecture, as I developed as an architect, I considered a service. We were meeting with clients--you’re hired to do a project and you bring the best you can do the table and deliver the best that you can do.

A bit later in the show (at about 15:00), Sealey asked about the Gehry Residence, the architect's renovation of his Santa Monica home.

FG: This is a middle class neighborhood, and I think of myself as a member of that class, so to speak. And I was trying to find my identity in that neighborhood. I think it is pushy in the neighborhood, there was a backlash….Now it’s settled down and it’s probably worth more than any house on the block, and you can sell popcorn there on the weekends, students come around after all these years, so I guess something’s going on.

KS: Something’s going on. I want to go to one more slide before going to the film.

FG: But it does bring up the issue, which I’m struggling with now in Brooklyn, a lot. We’re about to build, probably, an arena for the Nets, and a lot of housing. And everything we’re building is out of scale with the existing area. And the struggle is: It’s a neighborhood that’s not very well-defined, but there is a constituency of people that live there who fantasize this Brooklyn as brownstones and Court Street and Carroll Gardens and all that, which isn’t on this site. But in their mind, Brooklyn should continue to be like that. But this part of Brooklyn isn’t going to be like that. And so this developer’s is interested in doing something special. Their history is, they haven’t, but now they want to. I took them at their word, and they have been very fastidious in supporting the things that I think are important.

The struggle is, you end up with sort of a pseudo-19th century scheme—how do you take that into the 21st century, what makes it different, how do you make a complex that doesn’t look like a project even though one architect’s doing it? Normally I would’ve brought in five other architects, but one of the requirements of this client is that I do it. And so, how do you make buildings that fit, how do you make a new skyline, how do you develop a scale at the ground level, how do you create the opportunities, how do you fit an arena that at night brings a lot of people in, and is bright and sparky and a party, and the during the day what does that mean.

Those are all the issues, and they’re similar to the issues of my house, just at a bigger scale. I have a sense of responsibility to deliver something that’s a good neighbor. So I’m caught in this thing. And it’s a wonderful, scary place to be, I tell you. I have sleepless nights about it. I some days look at the project and think I can’t do it, I can’t, I go back and forth. I’m very insecure about it. I’ve brought all kinds of people in to criticize it, beat me up, do whatever, because I want to get it right. But it is that kind of issue.

KS: You bring up a number of issues… one in particularly concerns unbuilding. Some portion of the land that your structures will go on currently have buildings, is that correct?

FG: Not very many.

FG: No, because that was a given to me, I had nothing to say or do about that about that process, it was given to me. I suppose some of the buildings--when we started, there were a few buildings that were going to be kept, and we worked around them, and that felt better to me, to be able to do that, but they disappeared.

During the Q&A session near the end of the show (at about 48:00), the subject returned to Brooklyn, and Gehry's second sentence, about "who's right," was a lot less clear than his conclusion.

FG: God…Solomon, where are you now? [Solomon was the slide operator for the event] Getting it right is ephemeral, of course, because it’s who’s right is right. But I’m looking for something, I’m looking for something that makes a new neighborhood in a historic town that nee—that deserves something special for it. Because this is a big, an extraordinarily important project, and it’s all on my head, as they say. And a lot of responsibility, and a lot of anxiety, I must say, about it. There are days when I want to jump off the Brooklyn Bridge, but--because a lot of people are watching.

And the scale of the project is bigger than anything around it. And that’s the driving—it has to be in order to be accomplished. I’ve been pushing back. The developers have been very accepting of my pushback. And so we’ve taken chunks of it away, actually, to bring it down into scale, to integrate it with whatever the existing fabric is there and then finding a way, in brick and metal and glass, maybe precast, a language that can work in that area that’ll feel like a very special place and since there’s so many buildings, the thought of finding a hierarchy was important to me, that there would be certain iconic pieces and a lot of background buildings, so there’s a lot of very just simple buildings, blocky. I look at it sometimes and I say, well, that looks like a lot of stuff that’s already there. And then I wonder, am I being too polite? So there’s an anxiety about that.

In the end, I have to be responsible for it and stand up and say, I believe this is the way we should do it. And it’s that kind of back-and-forth struggle with the people that are working on it with me and the client. It’s all out on the table. We talk about it, like I’m just talking about it. I’m not trying to pull the wool over anybody’s eyes. I’m trying to do it within a very open dialogue with the people who are involved. What’s right is, if it turns out great, that’s what’s right.