It may sound like a small distinction, but it's an important one. Many press accounts use a careless shorthand, saying that the proposed Atlantic Yards project, or its Brooklyn Arena component, would be built "over" the Vanderbilt Yard of the Metropolitan Transportation Authority. The latest example: today's New York Post uses that shorthand: The arena — which would be built over the MTA-owned Atlantic Avenue Rail Yards...

But that's imprecise. The railyard's northern border is Atlantic Avenue; its southern border is Pacific Street. But the arena, and the project in general, would extend beyond Pacific Street to Dean Street. [Note that the map below, from Develop Don't Destroy Brooklyn, was made when the project was to include 17 high-rise buildings, rather than the current 16. Also see the ESDC draft scope document (which sometimes freezes in your browser) for a map.] 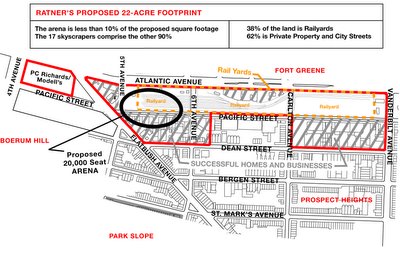 Why is this significant? Because developer Forest City Ratner cannot complete its 22-acre project simply by building on the 8.3-acre railyard (for which it has purchased development rights) and must purchase private property--and quite likely ask the state to condemn other properties via eminent domain. By contrast, the Extell Development Company's rival proposal to the MTA would have used only the railyard, conforming to the community-developed Unity Plan. That's not to endorse Extell, just to point out that they are very different proposals.

CBA question recurs: is it for the "Brooklyn commu...

Net gain in open space: only four acres, much less...

Ratner ties mean the silence (not quite) of Henry ...

The Times corrects the Roger Green error: report i...