In a 9/30/05 posting headlined BUILDing Blocks in the New York Observer's blog The Real Estate, BUILD lawyer Sharai Erima again explained why BUILD's IRS filing claimed $5 million was coming from Forest City Ratner: because under the Los Angeles airport community benefits agreement, one of the few such agreements in existence, a single corporation—Los Angeles World Airports--is paying for the job training at the rate of $3 million a year.
During subsequent negotiations with Forest City Ratner on the Atlantic Yards CBA, Erima said, “We found out that they would not be willing to be the sole funder.”

Erima's background was questioned, and then he stopped answering questions:
Erima was admitted to the New York State bar in 1999. His registration, under his old name, Sharai Elegba, is currently delinquent, which means that he cannot legally practice law--although that does not mean he cannot fill out tax forms.
When asked about the registration status, which was confirmed with the court system’s Office of Court Administration as well as the Appellate Division, Erima said, “I have no further comment.”

Also, in a 10/3/05 article in Brooklyn's Courier-Life newspaper chain headlined "Ratner Paid Biggest Arena Supporters $5 Million," state Assemblyman Roger Green, a founder of BUILD, claimed it was not formed solely to negotiate a Community Benefits Agreement, and that the group was formed "sometime before the Atlantic Yards was announced." 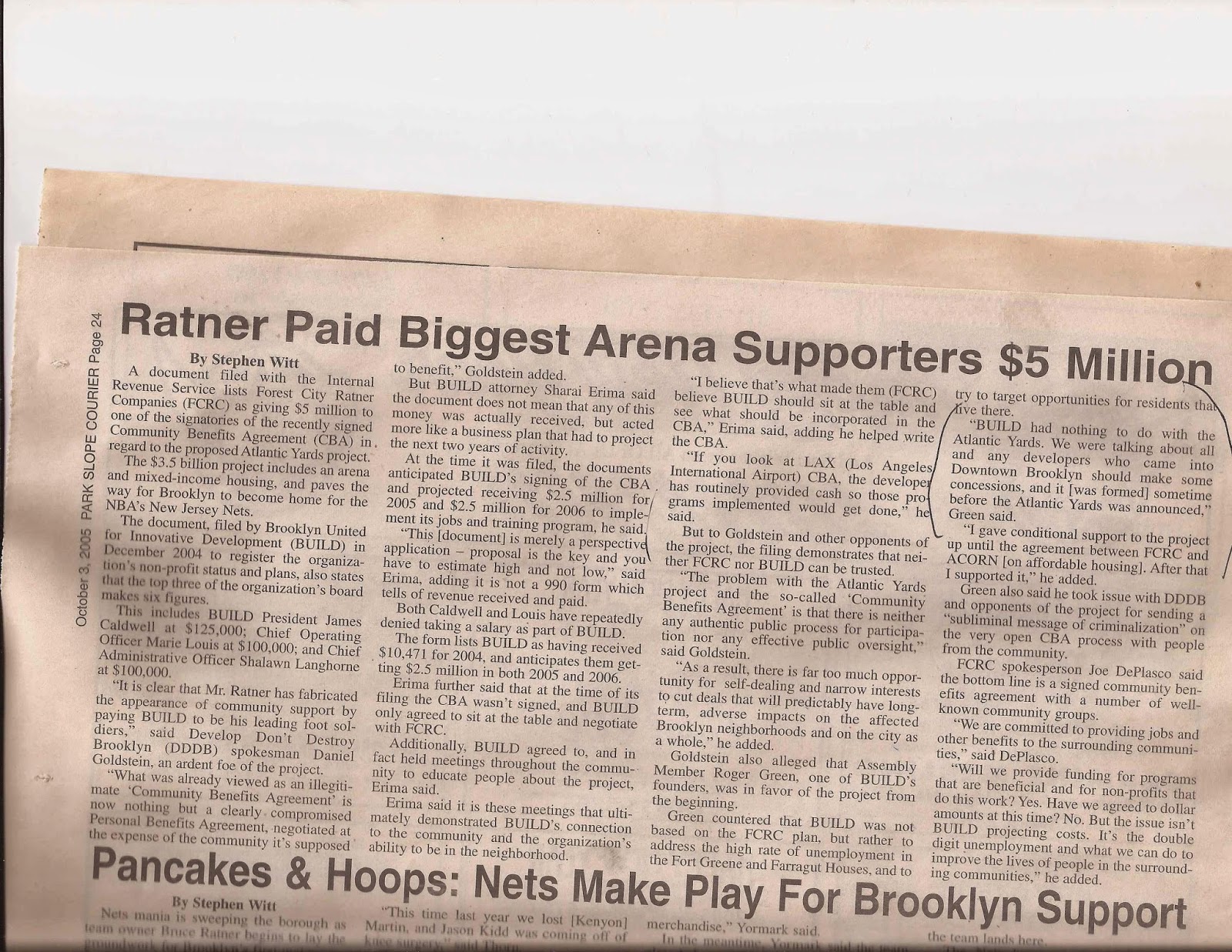 However, BUILD's web site shows clearly that it began in 2004, after Forest City Ratner's December 2003 announcement of the Atlantic Yards plan.

The text at the BUILD site states:
Myth: BUILD is financially supported by Forest City Ratner.
Fact: Since its inception BUILD has been supported by its members and community based supporters. BUILD’s faith in God and strong ties to the community has sustained and perpetuates our operations and advancement of our mission. Space, computers, supplies and time has been donated to the organization by its members since its inception this year (1/2004).

Correcting the Times: the railyard would move east...

Downscaling the project? Marty says yes, and the E...

MTA's Kalikow dismisses own appraiser as "some guy"

The Gutter on my report: "self-righteous public sp...

FAIR and Gotham Gazette link to my Times Report